Bia Haddad was suspended in 2019. She spent 10 months away from tennis, after which she proved her innocence. The ITF released her and she began the toughest journey yet: Regain her ranking as she was, at the end of 2020, the #1342 in the world. The toughest blow a tennis player can ever receive.

Imagine practicing and playing every day only to hear you have to spend 10 months away from the only thing you’re great at. Bia herself said in an interview she couldn’t even finish reading the ITF letter, she just cried like a baby.

I wasn’t suspended but I was quarantined. We all were, actually, I know. Every single country has suffered for the last couple of years and Brazil was in a midst of despair and chaos, with our leadership being less than satisfactory. Being a pro musician in the middle of all of this was… the worst. I didn’t know what to do with myself since mostly I can’t work from home. I thought about changing careers, driving cars, restaurants, whatever. I couldn’t deal with the thought that, for now, I was useless.

Instead, I studied. I practiced. I learned a LOT. They say that some things are blessings in disguise. I can’t look back at the pandemic with the feeling of ‘’that was nice’’. It wasn’t. It was awful. I was a shell of a man, of who I once was. Even now, I’m different from Mike pre-pandemic. But from all of this chaos, I grew a whole lot. I’m a much better professional than I ever was. I’ve improved.

Ever watched Bia playing in 2020, in her ITFs? I know you didn’t, but I did. Wow, what a ride that was. The streaming was crap and the scenarios were underwhelming. There are no ball boys or line judges. All in the capable eyes of the chair umpire. It wasn’t easy for a fan, imagine for the player. From beating Muguruza at Wimbledon to playing the W25 Montemor-O-Novo. But hey, she won that tournament!

If you play tennis, I think you’ll agree that even one single win can do WONDERS for confidence. It’s important to keep pushing, no pun intended! Imagine winning nine titles out of 10 finals in less than a year. You’d think you’re Serena Williams herself. That kind of mentality can only work in your favour. 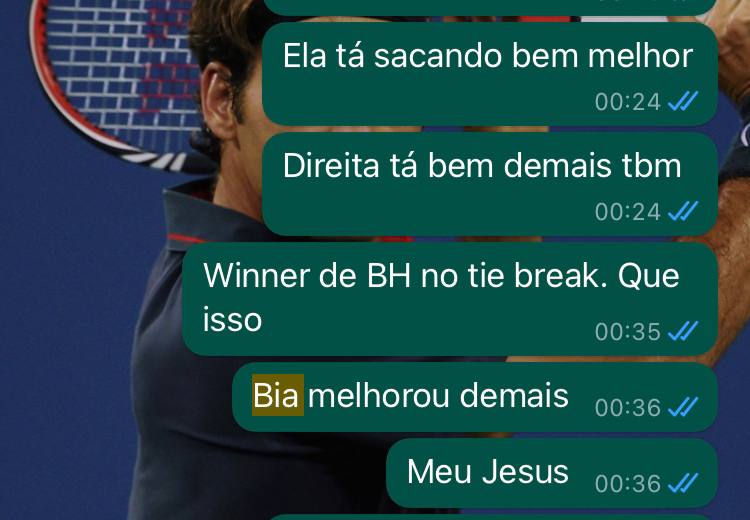 Sadly I lost my 2020 messages with a close friend of mine. We would send each other ranking updates on a monthly basis of Bia’s run. This is me saying, in 2021: ‘’She’s serving much better. Forehand is much better too. BH winner on a TB, what is this. Bia has improved a LOT, my god!’’

Fast forward. Everyone in tennis twitter is talking about Bia. Good or bad, they are. She’s that girl, she’s relevant, she’s important and she’s a winner. 12 match winning streak, back to back titles on grass, masters final, doubles grand slam final, BEATING THE WORLD #1, all in 8 months. From sending prints of her ranked #200 saying ‘’she’s getting there’’, to seeing her #16 in the world…

I wasn’t banned, but I was restrained. I came back and conquered my space. I am now working every week, playing, recording, writing, having fun and making money. Bia came back and conquered her space, playing every week, winning titles and making rivers of money. Ironically, since I’ve been working much more, I missed almost all of her matches in Toronto, but who cares. The important thing is that she did it.

People call her a servebot. BIA! She had NO SERVE in 2020, for a player of her height. This friend of mine and I would constantly complain that she should do better on that shot and how her physique was underwhelming. But we were still rooting and waiting patiently for the days of wine and roses

All it takes is a week, or a couple of them. Maybe even a few months or a year. It takes hard work and patience especially coming from South America and Brazil.

Well, open the wine and buy her some roses. It’s been one hell of a journey.

One thought on “All It Takes Is A Week…”